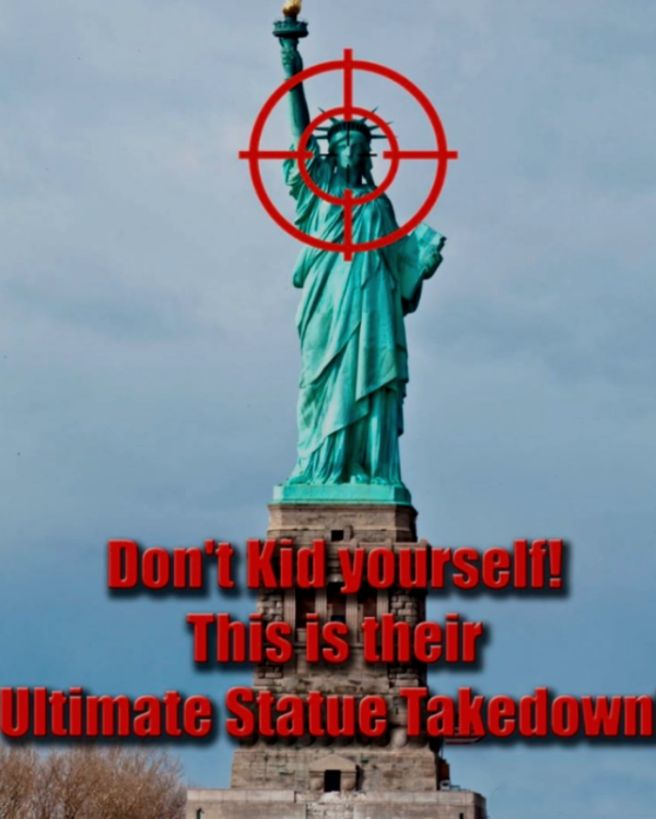 On the sidelines of the demonstration of « yellow vests », naked women wearing a red hooded sweatshirt open on their chest were standing silently facing a dozen gendarmes avenue des Champs-Elysees. They had the body covered with silver paint.

During the demonstration of Vests yellow, which are found on December 15 in Paris, women dressed in Marianne have engaged in a peaceful face-to-face with the police.

Fun British national cockade, on Phrygian caps! The cockade of the French Republic has identical colors, but inverted, blue in the center.

Three hundred and thirty American men and women have served as astronauts since the start of NASA’s human spaceflight program. Only one is publicly known to have been gay or bisexual — Sally Ride — and she kept it private until her death, yesterday (July 23), when her obituary on the Sally Ride Science organization’s website stated that Ride was survived by Tam O’Shaughnessy, her « partner of 27 years. »

As the first American woman in space and a scientist, Ride served as a role model for generations of young girls. Now, she’ll serve as a role model for LGBT youth as well, said her sister, Bear Ride. « I hope it makes it easier for kids growing up gay that they know that another one of their heroes was like them, » Bear Ride, who identifies as gay, told Buzzfeed yesterday.

Gay rights advocates say Sally Ride’s addition to the ranks of LGBT role models will make a tremendous impact. « Role models are incredibly valuable for everyone, but I think especially for LGBT youth, who may be born into a family where they don’t have an LGBT role model. It is so important for them to look out into the world and see they could be welcome in that world, » Stuart Gaffney, media director at Marriage Equality USA, told SPACE.com. « Sally Ride will be that for them now. »

Human Rights Campaign president Chad Griffin concurred, telling Buzzfeed, « The fact that Sally Ride was a lesbian will further help round out Americans’ understanding of the contributions of LGBT Americans to our country. » [Astronaut Sally Ride: In Her Own Words]

Ride’s decision to keep her sexual orientation private reflects her very private nature, sources said. But the lack of even one openly gay or lesbian astronaut in the history of American spaceflight may reflect the culture at the NASA astronaut office. Although NASA does not discriminate on the basis of sexual orientation, Michael Cassutt, author of five books and hundreds of articles about human spaceflight, said coming out would until recently have been « a career-wrecker » for an astronaut. « Not for any formal reason, but in the same way that any medical issue or even some kind of notoriety has been an astronaut career-wrecker, » Cassutt told SPACE.com.

« Any issue that detracts from the mission is or has been the kind of thing an astronaut wants to avoid. It isn’t NASA politics; it is NASA politics as practiced at the astronaut office, » Cassutt said, adding that the office has often resembled a « military squadron. »

A NASA spokesman told SPACE.com that astronauts decide for themselves what to reveal about their private lives.

« Certainly we try to be open with their professional activities and beyond that what they reveal privately is pretty much up to them, » said the spokesman, who asked not to be named. Still, the fact remains that no astronauts have ever come out as gay or lesbian, while many astronauts include mention of their husbands, wives or children on their NASA official biography pages. (As of today, Ride’s NASA bio page was updated to mention that she is survived by her mother, with no mention of her partner.)

Cassutt said even though he suspects there are or have been some other gay or lesbian astronauts, and in spite of the progress made on LGBT issues, « I don’t expect anyone in the current corps to be ‘out’ any time soon, assuming anyone is gay. »

The implication is that even in 2012, a same-sex orientation could still earn an astronaut unwanted notoriety that would detract from a mission. Robert Pearlman, space historian and founding editor of collectSPACE.com (a SPACE.com partner site), said the choice to shield one’s sexuality « unfortunately cannot yet be labeled ‘behind the times.’ While there are a great many more people who are openly gay today, we are not yet to a point of universal acceptance, » he noted.

There is also the fact that 219 of the 330 current and former astronauts served in the military, according to NASA. The U.S. military operated under a « don’t ask, don’t tell » (DADT) policy from 1993 until 2011, under which gay and lesbian servicemen and women had to remain closeted or risk expulsion. The repeal of DADT last year allowed gays and lesbians to serve openly in the U.S. military for the first time in history.

Of NASA’s continued culture of no one asking and no one telling, Gaffney of Marriage Equality USA said, « Ultimately, it’s a culture that needs to and will change. Harvey Milk said, ‘Come out, come out, wherever you are.’ The point being that the world needs to know, and LGBT youth need to see, that we really are everywhere and that includes people in every walk of life. Some professions have been quicker to change than others. Every profession is going to change. And the news this week about Sally Ride is just one more example of that. »

He added, « It will be part of her legacy that change will come to her profession as well. »